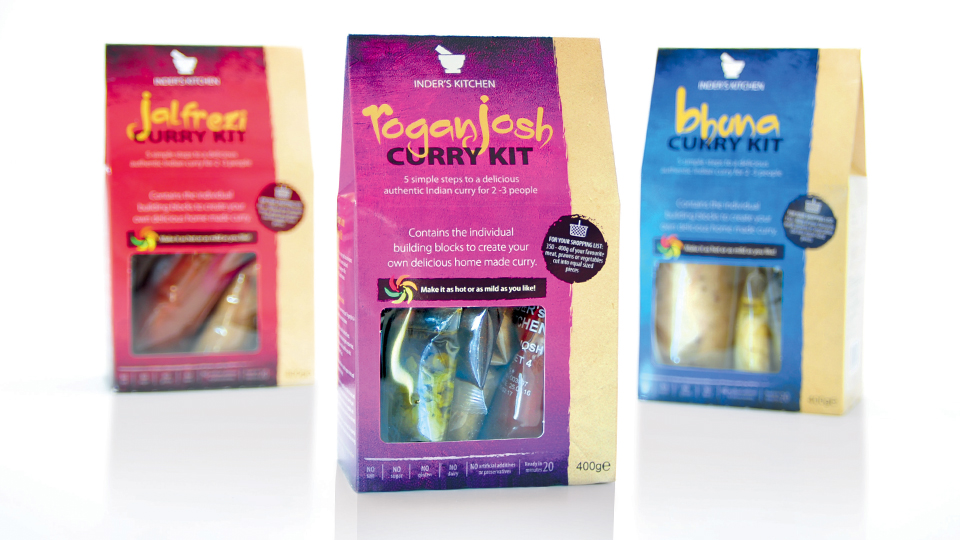 The launch of a new range of unbelievably delicious curry kits, prompted a recent converation about how TAG helped Inder’s Kitchen bring their vision to market. The following are Inder’s comments about the role TAG played and how insight of design helped bring Inder’s Kitchen, into yours!

If you think about the journey from where we started, the design, the name, the packaging, even the nature of the product itself, it just looks completely different to where we started, but actually I can’t imagine it being any other way now. Its exciting because we just feel that there’s nothing holding us back now.

The curry kits were inspired by lots of customers saying ‘I love curry but it doesn’t matter what I cook, it always ends up tasting the same’. People worry about having to buy lots of spices, having them in the cupboard but throwing them away six months later and never cooking it again because it was a nightmare.

Cooking curry shouldn’t be like that. So I took inspiration from my mum by pre-prepping things in the freezer, so it’s easy to pull out a block of half cooked onions, chopped ginger, garlic, chopped chillies… because as is the way with Indian culture, families, friends and neighbours just arrive on your doorstep, so it’s about being able to conjure up inspired, delicious curry and being able to do it quickly, without compromising freshness or flavour.

The initial idea was to do all this as a frozen product and when we came to you it was a case of, well, we’ve got this great product but no idea of how to get it into production. We didn’t even have a manufacturerand it was only your steer that put us on the right track. Actually after talking to you and your contacts, it became quite clear that we were on the wrong path and it needed to be a chilled or ambient product. That was a game-changer for the outcome of the project and otherwise it would have been a non-starter in many ways.

They’re tangible examples of how you played a vital role in the project but I think for me, it’s just the personal thing, the feeling of confidence in you guys. We always felt that you’re genuinely engaged and enthusiastic and excited about what we’re doing. I mean, obviously we’re going to be excited about a new idea, but you share it in a way that’s very unusual.

That confidence on a personal level, I think is massive, because these things don’t always go to smoothly, but it’s about how people respond when the chips are down. I was really excited about showing you the final kits because I knew you’d be jumping up and down with us. You guys are always there and for a client that doesn’t always know where they need to go or how to get there, you need to have confidence that somebody’s got your back and that they’re doing things for the right reasons. I knew if I ever got stuck you’d do whatever you could to help find a solution, so it was just a feeling of having a genuinely collaborative team, someone to share the ups and downs. 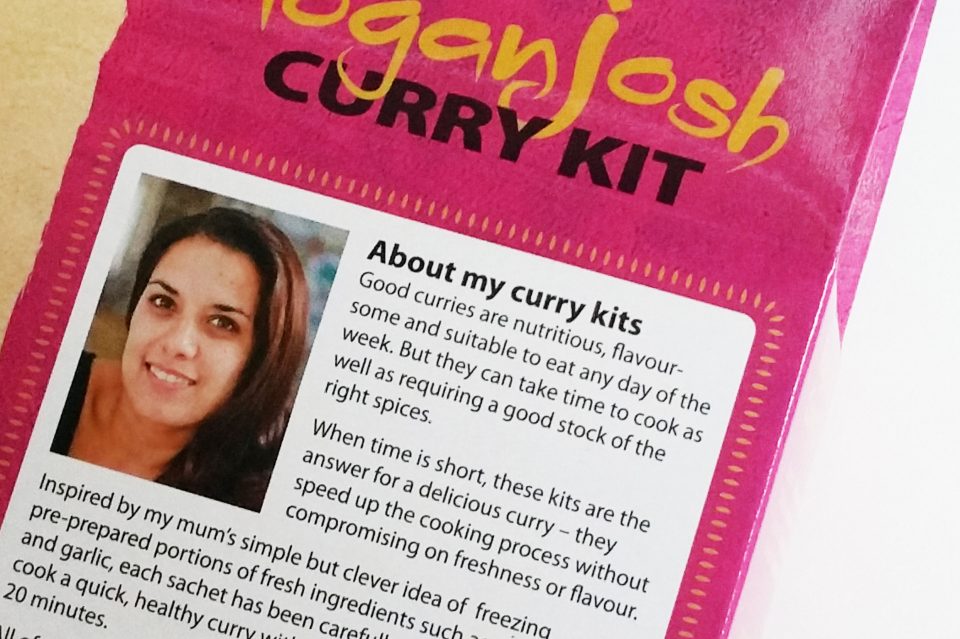 And there were ups and downs, like the customer research for example… we’d always planned to test the recipes but you convinced us into a much bigger consumer focus group to test the whole concept of the product – including the packaging. The initial feedback wasn’t what we expected and lead to a number of significant changes which meant rethinking the entire format. It effectively went from frozen, into a sachet inside a flat box, and eventually into a vertical pack with a very distinct visual language to reflect the creativity of the curry kit for better on-shelf presence.

The initial results of the focus group was one of my lows, but what mattered was that I wasn’t anxious about saying we had to rethink things…When the shit hits the fan, you guys are not difficult to deal with – you made it easy to, well, keep calm and curry on! Some designers get quite defensive and pretentious about their ideas and insistent if something’s not working, which makes it very difficult to go forward with confidence. That never happened with you… despite the bumps there was never a point where I felt we couldn’t sit down and work through it because you’d already thought ahead and had the right answers to the information we had.

What we ended up with is just beyond any expectations I ever had of how it could look, both in terms of design, but also the format of the packaging and even the kind of product I was going to create. Everything that was fed into the process happened because of a holistic approach and you guys were instrumental in facilitating that because of the expertise and the contacts you had. It’s something you ran with and I trusted you to do, almost as if it was your own product.

It all looks easy when the solution’s in front of you, but it has to look great in the right way and for the right reason – and at the same time, be achievable within budget and on time. Although we’re operating in the sector we don’t have any experience in large scale food manufacturing and your knowledge of the food and drink sector meant that you saved us a fortune in time, let alone product development. Without that, it could have been meant the project being dead in the water.

Smaller businesses need that level of personal connection and confidence that the designer ‘gets me’…to be able to have a project thought through by problem solvers and then delivered. So I really have enjoyed it, it’s been great and the finished product says it all.

That’s why our next project is going to be with you…it’s a massive thing but I feel totally secure that you’ll do something great. Two or three days after talking to you it’s obvious you’ve already spent a fair bit of time on it already by picking up on the little things that others would miss. To see something so radically different that hits the nail on the head straight away when we haven’t even formally started, well, that’s the difference.